A stone Medusa at Caesarea Harbor 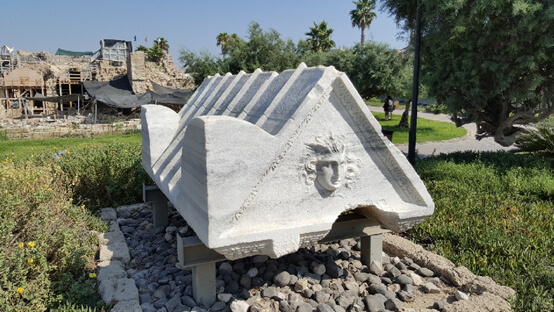 A new archeological exhibit at Caesarea Harbor has recently been unveiled to the public - the lid of a stone sarcophagus at least 1700 years old and decorated with a carving of the head of the mythological Medusa.

Archeological remains that were previously scattered around Caesarea Harbor have been repositioned to provide a unique archeological exhibition. One of the items is the cover of a unique stone sarcophagus (coffin) dating back over 1700 years, only recently discovered and considered to one of the finest of its kind.

In addition to the stone sarcophagus, four other archeological exhibits have been placed on display. Together they make a unique and impressive display. The exhibition is the work of The Antiquities Authority, the Caesarea Development Corporation and the National Parks Authority. Working together, they see this as just the beginning of a series of archeological displays at Caesarea Harbor that will focus of the archeological finds discovered at the harbor over the years.
The almost perfectly preserved cover of the sarcophagus depicts the snake covered head of the mythological Medusa and a series of masks. The masks decorating the sides of the cover are taken from the ancient world of the theatre. On one side of the cover are carved smiling masks and on the other, masks with sad expressions. The masks represent the two forms of theatre during ancient times - comedies and tragedies. The meaning of the word Medusa in Greek is "keeper". According to Greek mythology, anyone who looks directly at the Medusa is immediately transformed into stone.

In ancient days, it was customary to decorate graves, shields and other protective devices with depictions of the Medusa. It was believed that the use of the symbol would ward off evil and bad fortune.

Another special item on display in the exhibit is part of what was once a large and stately structure that has an inscription engraved on it, apparently to a woman called Cleopatra. It seems that she and her son or daughter where part of the local aristocracy that donated the structure to the colony of Caesarea in ancient history.
Yet another exhibit is a second sarcophagus with an inscription stating that the owner, Eliphis, dedicates the sarcophagus to his beloved wife, Menophila. The inscription says that "no man is immortal and that is the essence of life..."

The inscriptions are a rich source of information that helps us understand the history of Caesarea during the Roman and Byzantine periods. From them we learn of life in the city; of the city's institutions, of political and personal relationships and of the city's inhabitants - their names, professions and their religion.

About the sarcophagus
Burial in large, stone coffins (sarcophagi) was widespread in the Mediterranean basin during the second to the fifth century CE. This burial custom originated with the pagan peoples of the area and was later adopted by the Jews, the Christians and the Samaritans. The root of the word "sarcophagus" is from the Greek and means "meat eater". A sarcophagus has two sections: an oblong chest into which the deceased was placed and a cover. The sarcophagi were interred inside purpose built burial chambers (Mausoleum) or in excavated burial caves. The burial grounds of ancient Caesarea were located outside of the city's built up area.

The cover of the sarcophagus is impressive and appears to have been used for the burial of one of Caesarea's wealthy citizens from the Roman period. It is just one of the many unique stone artifacts discovered at Caesarea during archeological excavations and other activities and which are displayed at the new exhibition at Caesarea Harbor. The artifacts are tangible evidence and living witness to the rich life of Caesarea in the past when it was a vibrant, Roman, provincial capital. 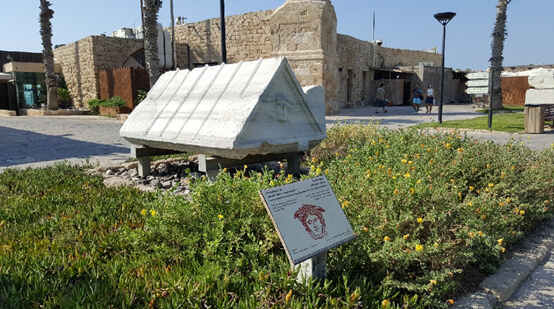